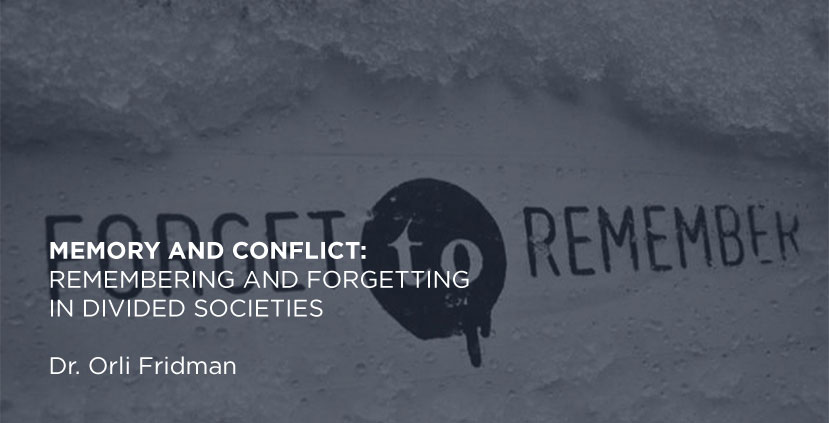 This course invites students to explore the study of conflict analysis and conflict transformation through a journey in the field of social memory studies. The course will focus on the role of memory politics in peace and conflict studies. By doing so, the course will allow students to delve into the analysis of internal dynamics of societies in or after conflict and discuss the ways in which they negotiate their pasts, presents and futures in the aftermath of war, conflict, repression, dictatorship, genocide and mass atrocities.

The course will explore dynamics and frameworks enabling the social organization of memory, and modes in which entire communities (and not only individuals) preserve, remember or forget the past, commemorate it, deny or obliterate it. Finally, the course will highlight practices related to memory activism in spaces of mnemonic conflicts over the narratives and representations of the past.

In order to do so, students will be introduced to some theoretical frameworks in social memory studies and in conflict studies. Students will then apply this theoretical knowledge to a number of case studies, allowing them to further investigate the role of memory and memory activism in conflict analysis, and think comparatively about processes in conflict and post-conflict transformation.

Dr. Orli Fridman is an associate professor at the Faculty of Media and Communications (FMK), Singidunum University where she heads the Center for Comparative Conflict Studies (CFCCS). She also is the academic director of the School for International Training (SIT) study abroad program in the Balkans (Peace and Conflict Studies in Serbia, Bosnia and Kosovo).

Her interdisciplinary research focuses on Post-Conflict Transformation, Memory Politics and digital memory activism. She is currently working on a book on Memory Activism in Serbia. Her recent research projects focused on Kosovo-Serbia relations and practices of everyday peacebuilding.

Since 1994, Dr. Fridman has been involved in political education. She was trained as a facilitator for groups in conflict and worked with groups from Israel/Palestine, Northern Ireland, Cyprus, and the successor states of the former Yugoslavia.

Her most recent publications include: ""Too Young to Remember Determined Not to Forget" Memory Activists Engaging with Returning ICTY Convicts" (International Criminal Justice Review, 2018); "Protiv Nenormalnog: An analysis of the #protivdiktature Protests in the Context of Memory Politics of the 1990s in Serbia" (Contemporary Southeastern Europe, 2017); ”Alternative Calendars and Memory Work in Serbia: Anti-War Activism after Milošević” (Memory Studies, 2015); Unstructured Daily Encounters: Serbs in Kosovo after the 2008 Declaration of Independence" (Contemporary Southeastern Europe, 2015); “Structured Encounters in Post-Conflict/Post-Yugoslav Days: Visiting Belgrade and Prishtina” (Civil Society and Transitional Justice in the Balkans, 2013).