June 28 to July 5, 2015
Center for Comparative Conflict Studies at the Faculty of Media and Communications (FMK),
Singidunum University, Belgrade

The 2015 Summer School was successfully completed, with more than 60 participants from over 25 countries world wide.

Orientalism, Balkanism, Occidentalism:
Thinking through discourses of "Othering" and Conflict

From the Discourse of Brotherhood and Unity to the Discourses of EU Integration: The case of “transition” in Serbia

The Challenge of International Intervention:
Balancing Justice and Order

Mnemonic Battles and Memory Activism in and after Conflict

This course invites students to approach the study of conflict analysis and conflict transformation through a journey in the field of social memory studies. The course will focus on the role of social memory studies for peace and conflict studies scholars and allow students to delve into the analysis of internal dynamics of societies in or after conflict and the way they negotiate their pasts, presents and futures in the aftermath of war, conflict, repression, genocide and mass atrocities.

The course will explore dynamics and frameworks allowing the social organization of memory, and modes in which entire communities (and not only individuals) preserve and remember the past, commemorate it, deny or obliterate it. Finally the course will highlight practices related to memory work and memory activism in spaces of conflicts over the narratives and representations of the past (Jelin, 2003).

In order to do so, students will be introduced to some underpinning concepts in social memory studies and in conflict studies. Students will then apply this knowledge to a number of case studies, allowing them to further investigate the role of memory and memory activism in conflict analysis, and think comparatively about processes in conflict and post-conflict transformation.

The Kosovo Case Study will be taught by Dr. Nita Luci from the University of Prishtina, who will join the course as a guest lecturer. 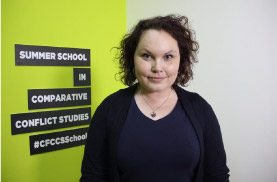 "...It is my impression that so far there has been relatively little comparative research into interveners’ motivations. Yet, there is a debate in the existing literature about whether interveners focus foremost on their own security interests or on humanitarian concerns, and about whether they succeed in bringing armed conflicts to a quicker end... the evidence suggests that external actors are motivated by their vested economic interests. This is a factor that should be analysed even more systematically in the future as it might help us explain why some conflicts attract swift military intervention while others do not." 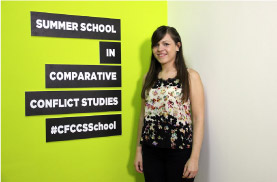 Why is it so interesting and important to analyze discourses of "othering“, especially when we try to understand conflicts and policies?

"“Othering” is a process where power is (ab)used in order to cast an individual or a group into the (negatively) stereotyped role of the “other(s)”. Thus, a social group distance between “us” and “them” can be created and reinforced where the latter can be presented and perceived as being fundamentally different and highly competitive with the group one belongs to. In times of conflict, discourses of “othering” are not only indispensable tools in the process of creating a divide between supporters and enemies of one’s argument, but they are also among the most powerful and dangerous weapons when it comes to essentializing identities and combating the “other(s)”. It can reduce our level of empathy, and can ultimately be used for legitimization the dehumanization of the “other(s)." 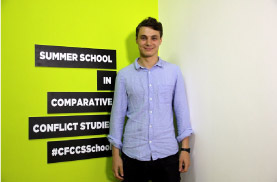 "Economic interests? Power? Influence? Hubris? Neo-imperialism? A sense of morality? Humanitarian motives? If I had to choose I would say power and influence. Unfortunately."