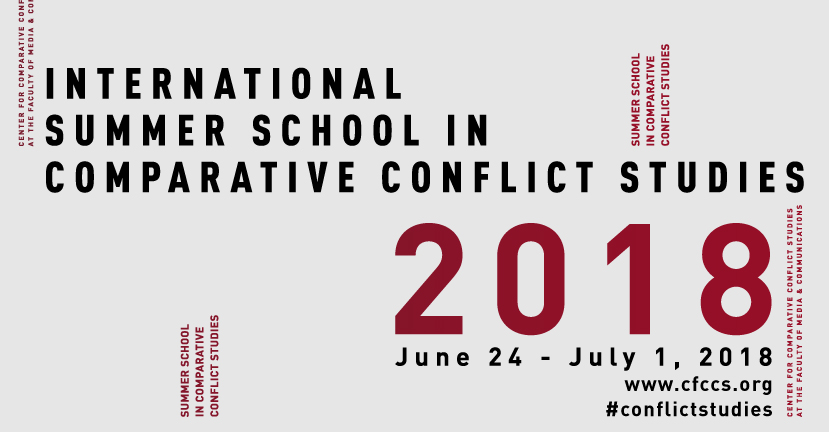 June 24 to July 1, 2018
Center for Comparative Conflict Studies (CFCCS) at the Faculty of Media and Communications (FMK),
Singidunum University, Belgrade

The Summer School in Comparative Conflict Studies is part of the Politics department at FMK and the MA program in Critical Political Studies. It provides a learning opportunity for students interested in the study and analysis of societies in and post-conflict. Interdisciplinary in its nature, drawing from the fields of Peace and Conflict Studies, History, Anthropology, Education, Law, Political Sciences and International Relations, the Summer School in Comparative Conflict Studies provides students with an interactive learning experience utilizing frontal lectures and class discussions focusing on comparative conflict analysis of different case studies.

This course invites students to explore the study of conflict analysis and conflict transformation through a journey in the field of social memory studies. The course will focus on the role of memory politics in peace and conflict studies.  By doing so, the course will allow students to delve into the analysis of internal dynamics of societies in or after conflict and discuss the ways in which they negotiate their pasts, presents and futures in the aftermath of war, conflict, repression, dictatorship, genocide and mass atrocities.

The course will explore dynamics and frameworks enabling the social organization of memory, and modes in which entire communities (and not only individuals) preserve remember and forget the past, commemorate it, deny or obliterate it.  Finally, the course will highlight practices related to memory work and memory activism in spaces of mnemonic conflicts over the narratives and representations of the past.