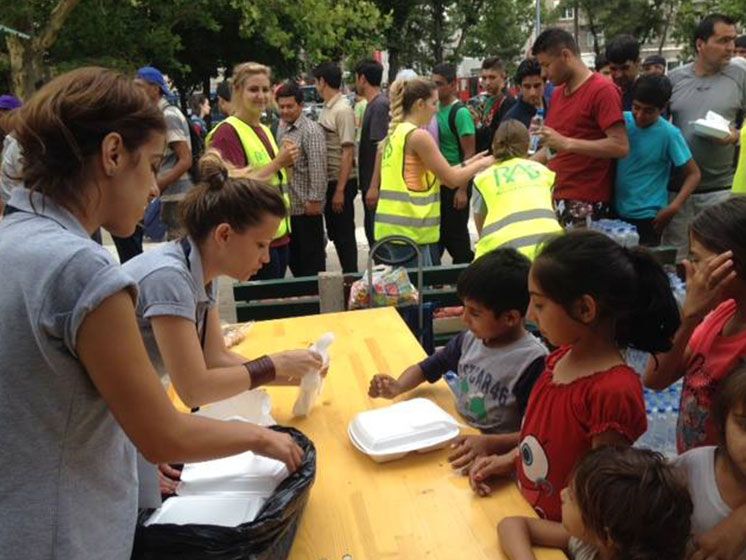 ''The starting point of critical elaboration is the consciousness of what one really is, and is 'knowing thyself' as a product of the historical processes to date, which had deposited in you and infinity of traces, without leaving an inventory. Therefore it is imperative at the out set to compile such an inventory.'' Antonio Gramsci

Walking towards the Faculty of Media and Communications, for our last day of the Summer School course, I was passing through a park where refugees who come to Belgrade usually spend their afternoons. I heard a child ask his mother who are these people in the park, are they ''gypsies'' – at first she asked him to lower his voice and then attempted to explain the situation to him, saying that these are not Roma people, but rather people who came from a far away place, who are uneducated, poor and potentially dangerous. The first thing that crossed my mind was how ignorant she was, however, after that initial shock I tried to contextualize the situation.

The Others are here, we either do not see or do not know them. Further, we have no interest in getting to know them, we simply want them out, and that is the dominant narrative. And that is profoundly hypocritical given the Balkan's horrific past, especially during the wars of the 1990's. We at least should be able to understand people fleeing war, fleeing for their life, and being denied assistance due to their positioning as Others. And I think this precise contradiction of having, as a people, a history of struggle and war, but still being able to other and distance people who come from similar realities, is very relevant to the “Orientalism, Balkanism, and Occidentalism: Thinking through Discourses of “Othering” and Conflict” course I chose.

When choosing the course, I knew that when we would be thinking and discussing these different discourses and their narratives, we will inevitably touch on the topics of the other Summer School courses, such as the role of religion in different conflicts, or the ethics of intervention and prevention. And the course was indeed a place of many interesting and complex discussions on these significant topics, with all participants reflecting from their particular contexts.

During these discussions, we spoke of the contradiction I previously mentioned, and how we mimic the externally imposed constructions of our own cultures, unconsciously acting as crucial agents in the maintenance of stereotypes connected to the extremely problematic discourses of Orientalism and Balkanism, deeply affecting our own lives. What is consistent in these discourses of othering, be it in Occidentalism, Orientalism or Balkanism, is the essentialist understanding of very complex realities and histories, falling into the trap of perpetuating the continued othering of different peoples, at some point or another and focus on our similarities rather than on our differences. We must be open to different cultures and experiences, as only with acceptance bridges can be built.

Reflecting on this contradiction of Others taking part in othering and the many discussions around it, which we had throughout the course, especially those regarding importance of power dynamics between the narrator (the subject) and its Other (the object), I have come to understand how crucial it is for us to continue to cooperate, exchange experiences, and stand in solidarity with different oppressed communities and peoples around the world, in order to deconstruct the concept of the Other within the existing dominant discourse of power and violence.

Participant of the course: Orientalism, Balkanism, Occidentalism: Thinking through Discourse of 'Othering' and ConflictRecepient of the 2016 European Fund for the Balkans EFB Scholarship