Fostering a Critical Account of History in Kosovo: Engaging with History Teachers’ Narratives of the Second World War

This report provides unique knowledge on actual history teaching in Kosovo high schools, with a focus on the teaching of the Second World War. The findings are based on research conducted by two teams of scholars in the two separate educational systems operating in Kosovo, one governed by Kosovo authorities (Albanian high-schools), and the other by Belgrade (Serbian high-schools). By conducting in-depth interviews with twenty-five (25) teachers, the researchers came closer than other previous studies on history textbooks to capture what actually happens in classroom exchange.

The reason for choosing the teaching of the Second World War is that, as the midwife of Socialist Yugoslavia, perhaps no other event in the modern history of Kosovo and Serbia has had the same power to generate national narratives and counter-narratives. In fact, the review of primary and secondary sources on textbooks on the Second World War presented in this report shows how the history of this conflict - whether it is Albanian or Serbian history - is dominated by narrow and skewed views, reflecting a strong link between historical narratives and nation building concerns.
This report’s findings, however, suggest that the problem with history teaching of the Second World War in Kosovo is not just that mutually exclusive nationalist narratives continue to dominate.

The reality is much more complex:

The findings of this report concluded that what history teachers need in Kosovo is better scholarship. However, change cannot come from the outside, not even from the best-intentioned reformers, such as experts’ groups interested in promoting historical dialogue between hostile nations.
On the contrary, in order to be effective, change must come first from the inside, from a breach in the insularity of Kosovo’s and Serbia’s historiographies of the Second World War. Albanian and Serbian researchers need funds to study abroad, conduct archival research in the region and beyond, and produce a new body of literature of the history of the Second World War that addresses the fundamental aspects of this conflict, which national historical narratives often exclude or distort.

This research was implemented by the Kosovo Oral History Initiative and the Center for Comparative Conflict Studies with the support of Austrian Development Agency. 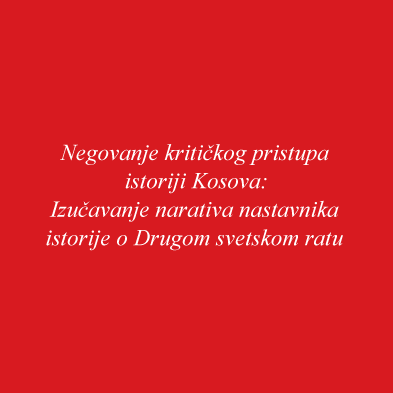 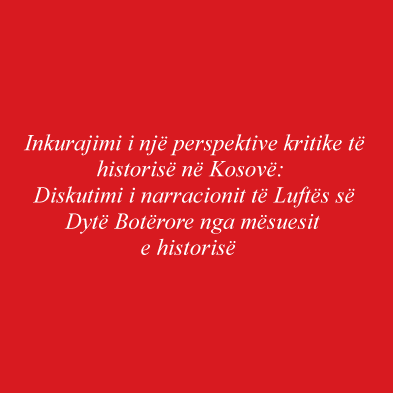