The first Israeli I met upon landing in Tel Aviv was Eitan Bronstein. Eitan is the founder and former director of  Zochrot, and was our local coordinator for the study seminar.  Zochrot acts to challenge the Israeli Jewish public's preconceptions and promotes awareness, political and cultural change within it, among other things, to create the conditions for the return of Palestinian refugees and a shared life in this country. I had heard a lot about Zochrot even before I came to Israel but it was only there that I truly understood why what Eitan and his colleagues do and what they believe in is admired around the world.

During our stay, we visited several locations in Tel Aviv and its surroundings, where Palestinian villages once existed. Some of the villages are today completely invisible, due to its total destruction by the Israeli Army in 1948.   Recreational parks for children, parking lots and university dormitories stand in their place today. The inhabitants of these villages were expelled to Jordan, Syria, West Bank, Gaza ... Their descendants are only rarely given the opportunity to visit the places where their homes once stood.  According to law passed after 1948, their land now belongs to Israel and to the Jewish Israeli people.

Today, only some rare photographs and a few barely visible ruins overgrown with vegetation bear witness to the existence of these villages. We were taken to the villages by Umar al-Ghubari our excellent guide from Zochrot. He told us about their former inhabitants, their everyday life and the event that forever changed their lives – Nakba.

Canada Park is located approximately 20 km from Tel Aviv on the road to Jerusalem.  It is a heaven for walking and cycling. At its entrance there is a signboard highlighting the main attraction of the park – the Roman bath houses which date back more than two thousand years. After a walk through a thick forest we arrive at the site.  Eitan draws our attention to the domes on the top. They belonged to the structures that were erected at the time when these baths were used by Palestinians, who had inhabited the place for centuries, until 1967. Eitan then shows us some photos of Imwas, the Palestinian village which previously stood there. When Israeli troops moved into the village during the Six-Day War in 1967, they ordered the village residents to take their essential belongings and leave the village. A couple of photographs, showing the ruins of the village houses, the preserved Roman bath houses and an olive tree bear witness to what became of the village. The Roman baths and the olive tree are still standing. In one section of the park the rubble from several demolished village houses can be seen. Large part of the village was razed to the ground; soon afterwards, trees were planted on top of it, bought with the money of Canadian donors. 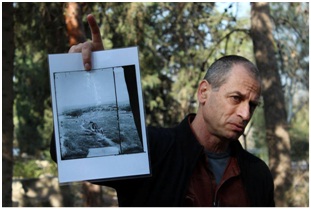 Eitan Bronstein in Canada park, with the photo of the devastated Imwas.

The not so distant history of this place, on whose remnants park visitors stumble upon, was persistently denied and ignored by the Israeli state. The existence of a Palestinian village in what is now the park was acknowledged only a couple of years ago. It all started when Zochrot posted a sign next to Roman bath houses telling the full history of the park, including information of Imwas and its destruction in 1967. Shortly afterwards, the sign was removed by unknown persons. Over the next few months, and following an intense correspondence with the park management and taking the case to the court, Zochrot finally had the park management erect a sign highlighting that, after the Romans and before the park was built, a Palestinian community lived on that location. 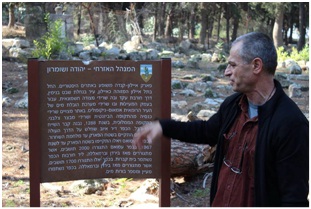 The sign in which existence of Imwas is acknowledged.

The suppressed history of Imwas is now written in a public space.  It is written thanks to the people who belong to the very community in whose name this village was wiped off the face of the earth. Leaving Canada Park I was thinking about how this small sign with several pieces of historic information on it can defy the terrible abyss separating the two peoples.  It is too small to bridge that abyss, but one thing is certain: in some future history of Israeli-Palestinian reconciliation it will be recognized as one of places where it all started. So will be Eithan and Zochrot.