The Center for Comparative Conflict Studies (CFCCS) was founded in Belgrade in 2008. It is a research and educational center at the Faculty of Media and Communications (FMK), Belgrade Singidunum University.

The CFCCS is an educational center dedicated to the comparative analysis of societies in conflict. Working primarily within the context of the conflicts in the former republics of Yugoslavia and Palestine/Israel, the Center provides opportunities for university students, scholars, activists and educators to critically engage in the study and analysis of conflict, its transformations, and various roles taken up within conflicts. In so doing, the Center offers theoretical and practical resources for those working to be effective agents of social change. We achieve our goals by offering comparative interdisciplinary frameworks for understanding dynamics within societies in conflict.

We are committed to an educational model which bridges theory and practice, education and action, consciousness and change.

Our methodology is grounded in the systematic exploration of the dynamics of societies in conflict. We emphasize the contexts in which conflicts are situated for the purpose of understanding sociopolitical phenomena associated with conflicts. The conflicts in the republics of the former Yugoslavia and/or in Palestine/Israel are at the center of the personal, political, and academic lives of our team and therefore our programs. We aim to de-exceptionalize these conflicts by examining them within a broader comparative framework. We believe that studying another conflict allows participants and students, who self-identify as members of groups in conflict, to explore and engage with new perspectives from which challenging questions are raised and tentative answers are consider.

We explore the dynamics of conflict through an inter-disciplinary comparative approach that analyzes the intersections of nation, religion, gender, and class. In particular, our research interests and study seminars focus on the following themes: 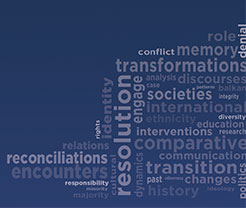